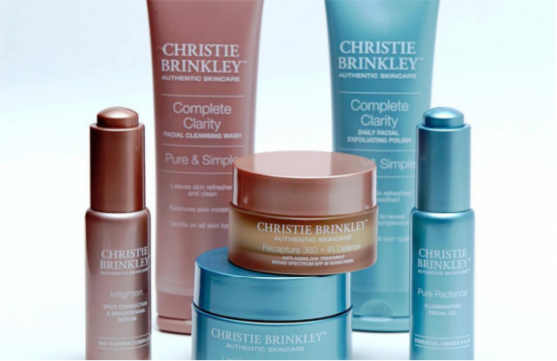 The perpetually cheerful Christie Brinkley was downright upset during a telephone call last week, discussing scammers using her image to sell skin care that isn’t hers. She’s on a mission to stop the damaging practice.

“I’ve developed relationships with women who trust me and that credibility takes years to build,” Brinkley told WWD. “I’ve been in this business 40 years and there is this constant gnawing of my trust by fly-by-night [companies] with products with who knows what in them.”

Counterfeiting is a mammoth problem, accounting for as much as half a trillion dollars a year, according to Kelly McCarthy, partner at Sideman & Bancroft, an intellectual property and brand protection group. Upward of $75 million in annual losses are attributed to counterfeit products in the beauty industry, according to estimates.

“Cosmetics and skin-care companies are hit hard by counterfeiters. This is unfortunate because counterfeit cosmetics and skin care can contain potentially dangerous ingredients which can pose a health and safety risk for the consumer,” she said.

That’s the issue Brinkley is facing after a lawsuit filed in Tennessee last week claimed products affiliated with her skin care under the names Skin Noir and Eye Noir burned a consumer’s face. The products alleged to cause the damage are not authentic, according to Andrew Surwilo, the chief executive officer of Atlantic Coast Brands, the producer of Brinkley’s collection, Christie Brinkley Authentic Skincare. Atlantic Coast Brands has systems in place and scrapes the Internet looking for rogue companies making a living hijacking intellectual properties and marketing fake goods. Surwilo is confident the products named in the lawsuit are not Brinkley’s.

“We are sympathetic [to the victim] and want to find and pursue our own legal action against those damaging our brand,” Surwilo said, adding his company sends out at least one cease and desist letter a week to fakers. “We are not going to stand by idly.” At press time, Atlantic Coast Brands was reaching out to the plaintiff’s counsel to “correct the record” and dig deeper into the counterfeit marketers before deciding on legal action. Close to tears, Brinkley said she is fighting against those who defraud her loyal base of customers. Late last year, in fact, she teamed with Dr. Mehmet Oz for a segment on his show where, with the help of investigators, they confronted some of the scurrilous companies.

“One way we can help women distinguish my products is that these fly-by-night companies don’t put my name on the bottle,” Brinkley said. “As soon as we get wind of it, we try to shut them down.” The scammers merely insert another celebrity name into taglines promising to reveal a star’s beauty secrets, but use the same generic bottles. Brinkley’s products are also only sold on HSN, Kohl’s, Amazon and her own site, www.christiebrinkleyauthenticskincare.com. Brinkley, who just expanded into color cosmetics, is also using exposure through her social platforms as ammunition against rogue sellers. She vows to post more photos on her Instagram, so consumers see her actual packaging.

Brinkley is not the only beauty marketer used in bait and switch – and she hopes her efforts will benefit the entire business. Beauty, according to Chad Annis, founder, and CEO of Market Defense, which offers online brand protection, is among the top three counterfeited categories. Compounding the matter, he said, is the elevated concern associated with products used on the body.

Being duped is a bigger issue online where consumers often opt for the lowest price, not realizing that could be products that are not the authentic version, according to Annis.

The issue of fakes sold at rock bottom prices was the theme of an episode of “Life of Kylie” last year when Kylie Jenner and buddy Jordyn Woods visited a Los Angeles store selling bogus Lip Kits. The duo purchased products to investigate the origin.

Ilana Jivago, after seeing sales siphoned off from her Jivago 24K fragrance, which at its pinnacle chalked up sales exceeding $100 million, invested more than $30 million to nab counterfeiters. She now has safeguards in place, including holographic chips, to track her products.

While legal action is one avenue to halt larger scale scammers, explained McCarthy, it makes less financial sense to ferret out the smaller players “operating out of garages.” Many of the sources are also in foreign countries, hamstringing efforts to shut them down. Sadly, she said, the fight against counterfeiters falls on brand’s shoulders. “But many companies operate under an assumption that they can’t do anything about counterfeits, so they just try to ignore the problem. This is not a good strategy. There are systems that can be put in place at a variety budget levels that can cut into the counterfeit market and make a difference for the brands’ global reputation.”

Annis agreed, especially in regard to selling on Amazon. “You must own your own store on Amazon,” he said. Additionally, marketers need to implement systems, such as ultraviolet stamps, that can track packages. “Don’t let your brand be controlled by other people in the marketplace.”